Written by SAC(T) Alistair Webb, here is the account of the 2019 expedition to Chile with Gp Capt Moriarty, Sgt McLean and Sgt Critchlow:

The week began on Sunday when we landed at Santiago International Airport, met by Major Gonzalo Vera, the Officer in Charge of the FACh Glider “No Engine Squadron” who welcomed us and and showed us to our accommodation for the exchange, a military hotel in Santiago, just 15 minutes from the airfield. 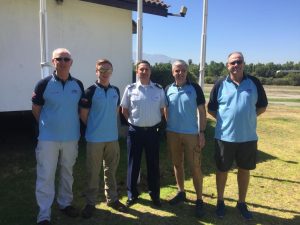 The first day we arrived at the airfield and were all very warmly welcomed by the other members of the Squadron. After some very comprehensive briefs about the Squadron, local procedures, safety and security, we had our sortie brief for the day. The first mission was a short familiarisation flight to show us the local area and the procedures for flying at the airfield, as well to let us get a feel for the aircraft we would be flying.

We then began to venture out into the mountains! Luckily the weather this week has been amazing, each flying approximately 4 hours a day, and sometimes climbing up to 18,000 feet. Some days have been much more challenging than others, with lots of turbulence to contend with, and thermals that were very difficult to climb in! We ventured as far North and south as we could, covering 135 nautical miles of the Andes, as well as following the border with Argentina to the east, we have all learned a huge amount so far. 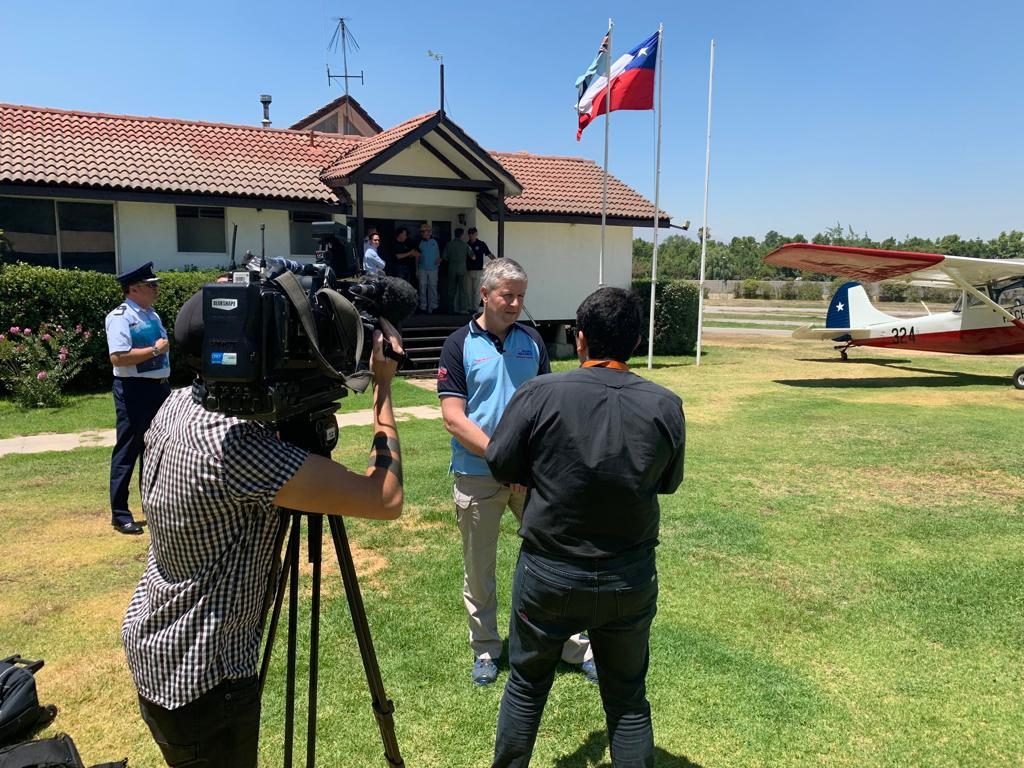 Eugene and I have learned the most as we only have some limited mountain gliding experience from Parcours Combatants, a tri-service expedition to the Alps in the South of France. For us, getting comfortable and confident flying close to rock faces to climb above them, and learning to thermal without a level horizon as a reference for turning has been the biggest challenges.  Whilst Paul and Mark are both highly experienced mountain gliding pilots, everyone on the exchange has found the flying very challenging at times, demanding 100% concentration at all times.

On Thursday Paul said he had “possibly the best flight of my whole life” which is certainly saying something considering he has over 600 hours flying in the mountains. We can’t wait to see what challenges and experiences next week holds! The weekend brought a welcome break from the hard work of flying during the week. 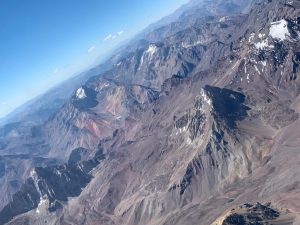 On Saturday we visited Los Dominicos, and explored an artisan market that showcased various Chilean examples of culture and craftsmanship. We learned about the history of the culture and different art forms from the different regions of Chile. They varied hugely, from the Spanish colonial influence, to the indigenous culture. We then returned to the airfield and spent the rest of the afternoon relaxing in the swimming pool.

We traveled to Valparaíso on Sunday, a coastal city with a rich history. Two of our FACh hosts, Gonzalo and Italo, acted as our very knowledgeable tour guides, showing us the sites and history of the city. We then had lunch at a seafood restaurant right on the beach in Viña Del Mar. 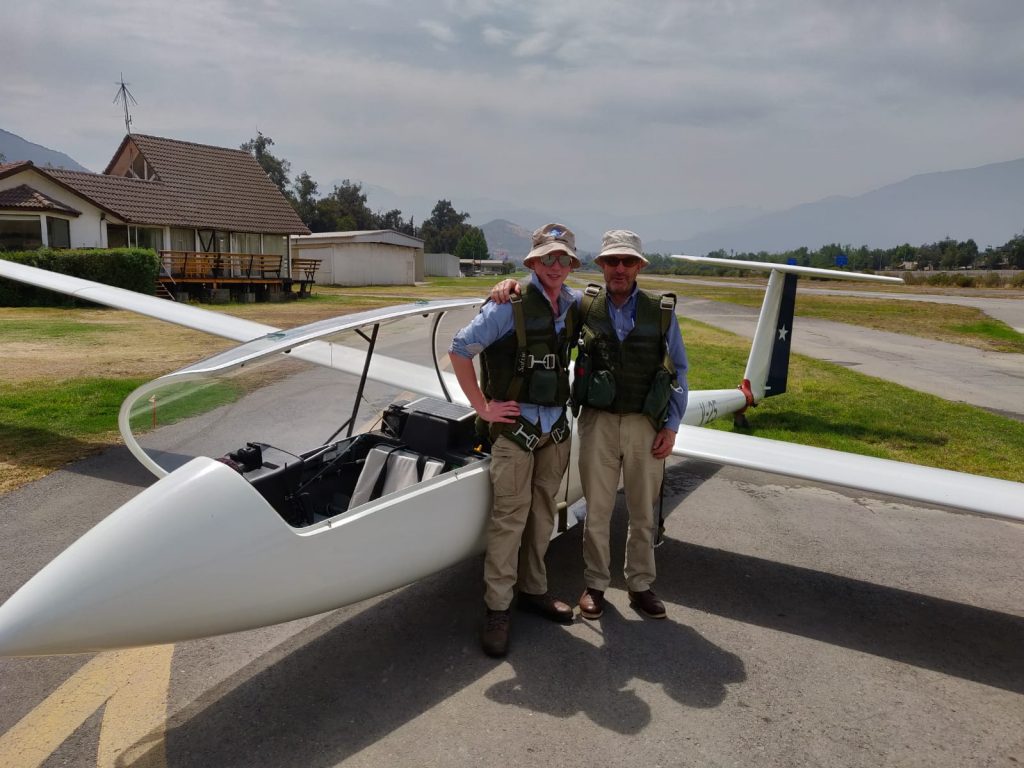 Back to flying on Monday, we were met with a rather disappointing met brief which predicted it to be a very difficult day due to weak and low thermals, and an inversion. In the hopes of giving us the best chance at staying airborne for any prolonged length of time we were towed higher and further up into the mountains, to where it should be a little easier.

We all struggled, scratching around for lift at low level for a couple of hours, but eventually we did manage to push up north into the higher ground. Eventually some of us managed to find some good thermals deep in the Andes near the border, and I managed to climb to around 19,500 feet. We then ran back to the south of Santiago, still above the hight of most of the clouds. To my surprise I stumbled across wave lift – incredibly smooth although not too strong. It made a welcome change from fighting turbulence and thermals in the lower levels! Due to the challenging conditions and the fact that I had been lucky enough to climb so high this was definitely my most enjoyable flight so far! 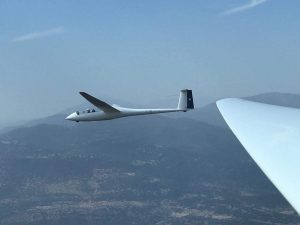 Tuesdays met brief was slightly more optimistic than the day before, with stronger thermals predicted. Although it was still a very hot day, with a stable air mass we knew it would still be a struggle. This was by far the most difficult day, everyone found it tough to find a good enough thermal to climb to allow us to push north into the mountains. Spending over an hour in the area where we were towed to eventually we got just enough height to fly along Los Espanoles, a ridge that leads to the North. Paul led the way, and once he reached an area called Lagunas, an area that normally provides very good thermals, we tried to find one to climb in. Unfortunately that was easier said than done! Paul climbed to about 3000m and decided to fly east, deeper into the mountains, but quickly returned when he realised it was even more difficult in that direction! After hearing that news the rest of us decided to turn around and fly south, back towards the airfield to see if we could make anything of the ridges closer to home.

The rest of the weeks flying was much of the same, hot days with a stable air mass that meant it was a real struggle staying airborne. On Thursday we visited the Chilean FACh military academy, the home of basic training for both commissioned and non-commissioned officers, as well as initial pilot training. We were shown around their pilot training facilities and aircraft, and their own museum showcasing their military aviation history by two student pilots.

Friday morning we went to Cerro San Cristobal, a huge statue of the Virgin Mary on the top of one of the many hills in Santiago with a fantastic view of the city. When we got to the airfield I found out I was going to get a short flight in a Nimbus, a high performance glider with a huge wingspan – I’d never flown anything this big before. Unfortunately as it was still fairly early in the day, there was no lift around to let me see what it could do, so I just slowly returned to the earth. Euge had the chance to fly the Nimbus the day before, and luckily he managed to do some soaring so had even more fun!

And then it was time for our last flight… Another challenging day, but the conditions were slightly better than they had been earlier in the week. We managed to fly further up Los Espanioles, and Paul ventured all the way up to Lagunas, and I ended up dogfighting with an Eagle in a thermal. 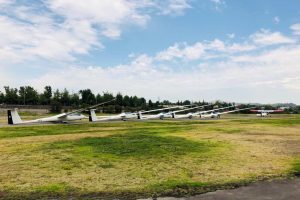 In the evening we had a large BBQ with everyone in the squadron being invited. Getting the chance to socialise with some people that we hadn’t had chance to before was great. At the end of the night we exchanged some gifts to say thank you for everything. We gave the FACh hosts an RAF Gliding polo shirt, and some other various RAF memorabilia. And we were given a FACh polo shirt, a decorated plate and a very fancy fountain pen. It really was the perfect way to end an amazing two weeks!