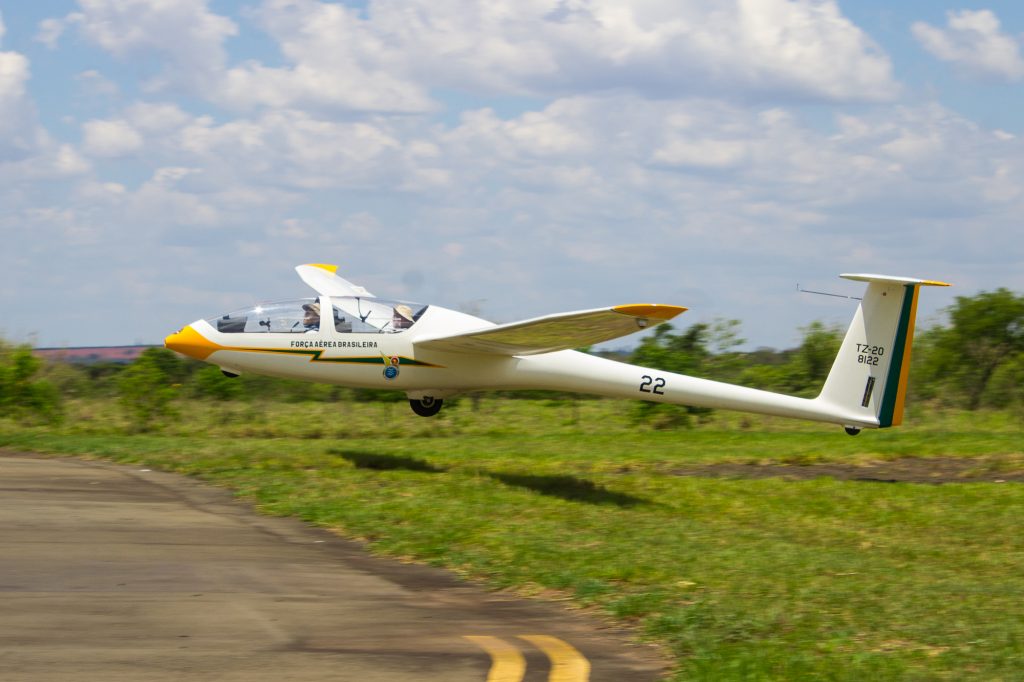 It’s not often that a ‘junk’ email turns about to be trustworthy, but in the case of the recent RAF Gliding and Soaring Association visit to Brazil the offer received certainly wasn’t too good to be true! The chance email that was mistakenly filtered as spam was an invite to attend the 30th International Gliding Competition at the Brazilian Air Force Academy near Sau Paulo. Numerous quick-fire emails were sent to graciously accept the offer and confirm with the Defence Attaché in Brazil that RAF attendance would be approved. 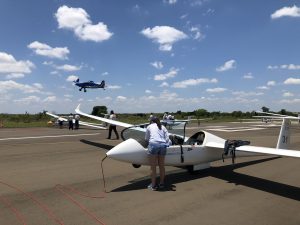 Sqn Ldr Jon Arnold and Flt Lt Luke Dale were selected by the RAFGSA committee to compete. Both of whom are experienced competition glider pilots and have flown in numerous overseas competitions. With the Brazilian Air Force courteously offering to provide accommodation and messing, and the Defence Attaché funding the flights everything was in place for the RAF to attend. After a long 12 hour flight and 3 hour drive the pair arrived at the Brazilian Air Force Academy in Pirassununga on 24th October 2019.

Gliders are very easy to transport. The wings detach with a swift unbolt and the entire airframe can be placed into a trailer in a matter of minutes. However, transporting two RAFGSA gliders for use in the competition some 6000 miles across the Atlantic Ocean wasn’t exactly an option! Fortunately, part of the invitation included the use of Brazilian Air Force gliders. So both Jon and Luke were each allocated a twin-seat Duo Discus high performance sailplane and Brazilian Air Force gliding instructor to show them the nuances of gliding in Brazil.

The terrain in the greater Sau Paulo region of Brazil is very agricultural, with lots of large open fields that could easily be used for landing in the event of the glider not being able to make it back to a runway. The weather conditions in Pirassununga were excellent for gliding. With that part of the Southern Hemisphere entering its Summer months the sky was filled most days with fluffy white cumulus clouds. These fluffy clouds are what glider pilots most often use to indicate where thermals are forming. These thermals are huge columns of rising air caused by the Sun heating the ground and in turn heating the air directly above. As the temperature of the air increases it becomes buoyant and a pocket of air begins to rise. When a glider flies into a thermal the pilot can orbit in the rising air which allows the aircraft to climb. Due to the hot temperatures in Brazil the thermals are so strong that they can allow the glider to climb at speeds of up to 1,200 feet per minute – which is quicker than most light powered aircraft! Strong thermals also lead to high cloud-bases, with climbs up to 12,000ft not uncommon for that time of year. These conditions are perfect for cross-country gliding which is essential for a successful competition. 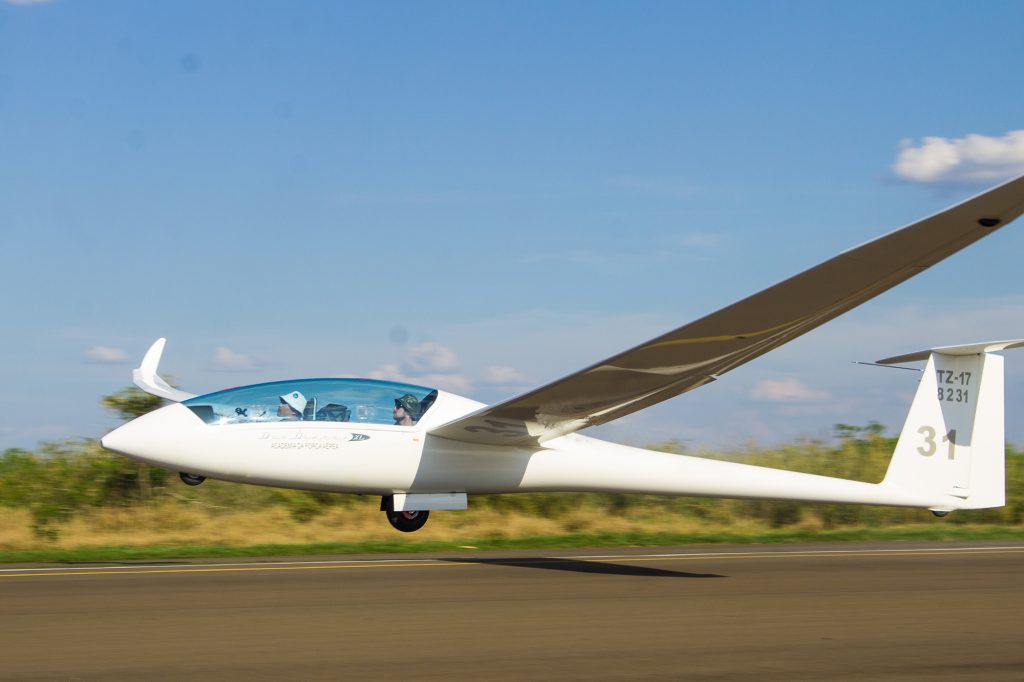 The competition itself took place over 4 days. Each day the weather would be evaluated using complex online forecasting tools to determine which regions would provide the best gliding conditions. A daily cross-country route for the gliders would then be declared by the competition organisers. These routes would normally comprise 4-5 waypoints to cover distances between 300-400 kilometres before landing back at the Academy. The waypoints would be programmed into the onboard glide computers in the cockpit to aid with navigation. Typically, by 11:00 the weather would be suitable to start launching the 30 gliders in the competition. This was achieved by using a fleet of powerful tow planes. Once the last glider was airborne the competition organisers would announce over the radio that the ‘start line’ was open. It’s now down to the pilots to choose the optimal time to start the task. Start too early and there’s the potential to miss out on better developing weather conditions. Start too late and there’s no guarantee there will be enough thermals to get you home. 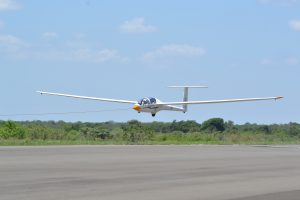 Choosing when to start is very much a game of tactics, but there is also an element of luck! Most pilots will ‘read’ the sky and come to similar conclusions about when to start which leads to an exciting race across the skies. Pilots will be vying to follow the best energy lines to achieve faster speeds and complete the day’s task in the quickest time. The glider’s position is logged by on onboard GPS which saves the route flown to an exportable file. These files are used by the competition scorers to determine how fast each glider flew around the task and points are awarded based on speed. The fastest task speed during the competition was over a distance of 390km at an average speed of 149kph (92mph) – all without an engine! 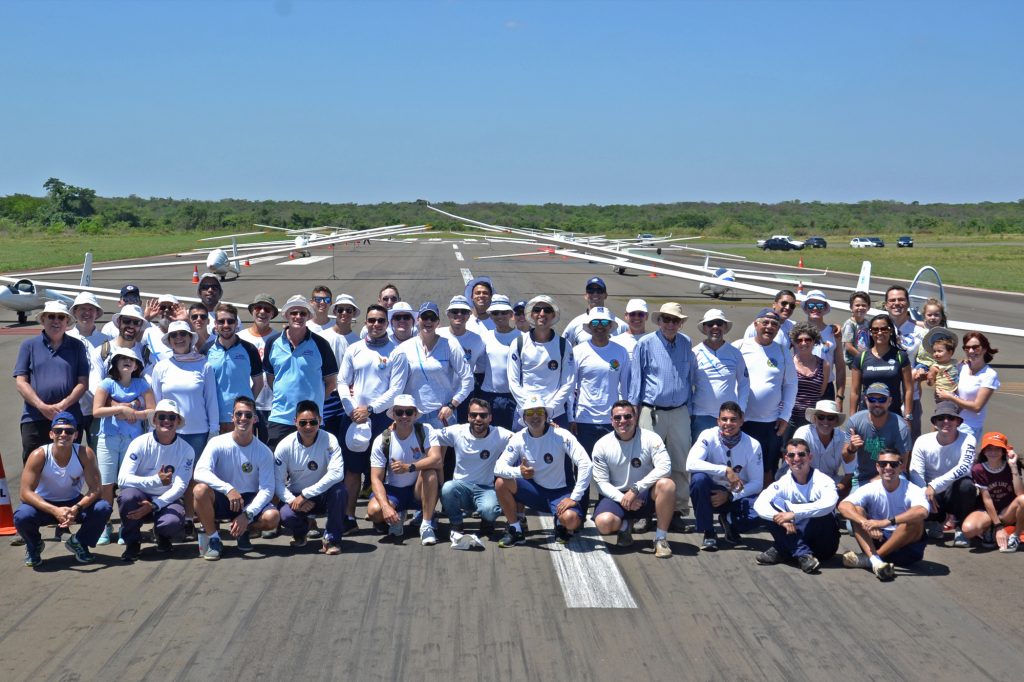 Each day the scores are added up and the pilot with the most points wins the overall competition. The RAFGSA had two podium finishes with Sqn Ldr Arnold finishing third and Flt Lt Dale finishing second out of 30 competitors. Flt Lt Dale commented – ‘The conditions available in Brazil are excellent for gliding. Some of the best I’ve experienced. It has been fantastic to strengthen our ties with the Brazilian Air Force through our common interest in gliding’.

Plans are now underway for a small team from the Brazilian Air Force to visit the UK in Summer 2020 and experience gliding in a somewhat more unpredictable British climate. 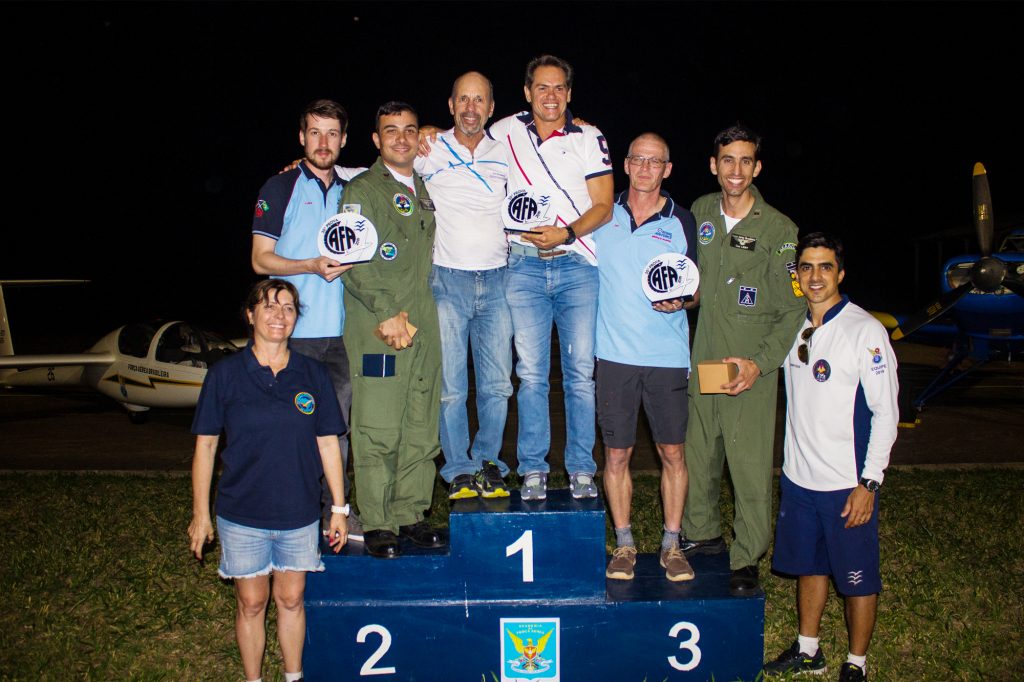