Congratulations to Flt Lt Al Clarke who has been crowned a European Military Gliding Champion after winning the mixed class competition at Holzdorf AB, Germany.

Here’s a short summary of Al’s time at the comp:

A few years ago I was at the Military European Gliding Championships in France when the UK team were approached by a German Colonel who invited us to the forthcoming competition in Holzdorf, Germany the next year. We were keen to accept but had no idea where it was until the then RAFGSA Chairman (Phil Sturley) pointed out it used to be on his target list in the Cold War Days. For those of you not familiar with East German airfields, look up Berlin and it is about an hour south of
that by car. 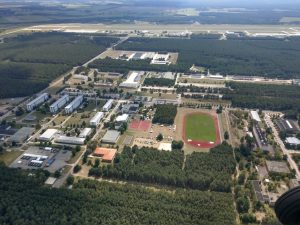 So that is where we found ourselves again this year, a small UK team
consisting of myself, Chief Tech Paul Mclean and WO Anne Maclean ( Paul was due to share the flying but picked up a knee injury before the competition). Travelling 900 miles with a glider trailer in tow can be quite a challenge but the main attraction, apart from the better weather than the UK, is huge areas of unregulated countryside to fly in, when compared with the congestion of British
airspace. The Germans are great hosts and encourage teams from all over Europe. This year attracted entries from the UK, France, Belgium, the Czech Republic, The Netherlands, Slovakia, Denmark and Switzerland, in total, 64 Gliders split in to 3 classes.

We were accommodated in a transit block which had clearly started life as offices as my room on the top floor was the size of a small flat and the ‘facilities’ were at the other end of the corridor, hot at times but very comfortable. We arrived at the airbase on Saturday 29th July at 2AM having arranged accommodation with the Luftwaffe but not realising that the overnight staff were civilians with no authority to let us in. Well the sunrise was spectacular when viewed from a Vivaro Van!! 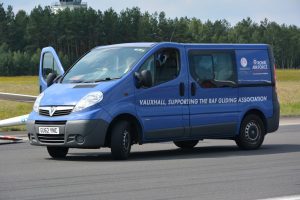 Once on the base we spent the day catching up on sleep and booking in to the competition, a long process to ensure all our processes and paperwork were aligned with the German system. So after 2 much needed practice days where both myself and the glider needed technical adjustments (the radio microphone had fallen off and the instruments were calibrated for the UK not Europe) we were ready to fly. The weather had got too hot and stable though, what a disaster!!!

The day was scrubbed and we were forced to endure a days swimming and sunbathing at the local lake. Paul in particular was finding it very stressful but managed to chill out a bit! So the next day was a competition day having cooled down below 35 degC and I flew 330 KM at 81kph for 6th place, a reasonable result as I was still suffering from instrument gremlins. How do you fly a competition in gliding? Well the rules can be complicated but in essence you climb up in thermals and glide around a pre set course as fast as you can with the winner being the fastest. If you fly between thermals too slow you will lose the day but if you fly too fast you will descend quickly and risk landing far away from home. In the example below, the course on day 4 was 430 KM around Eastern Germany with the North/South leg in Poland. (Border in blue to the east of the chart). 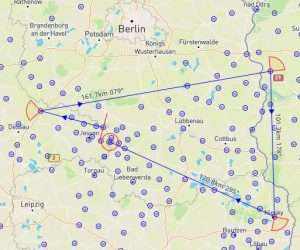 The next day was too hot again as were several days during the competition, so we went to Berlin and did the touristy bits. Berlin is a beautiful city with a fascinating history. I was amazed by the amount of parks and open spaces until it was pointed out to me that a lot of the open spaces came courtesy of the RAF, which was a little sobering. On subsequent days we visited the local towns around Holzdorf which also have colourful histories, being the stomping ground of Martin Luther who was converting the Germans to their version of the protestant faith about the same time as Henry the Eighth but a bit less violently. There are many impressive buildings such as the Schloss at Torgau which rival the best Chateaux in France and escaped the attentions of the RAF in the last War by being too far East. 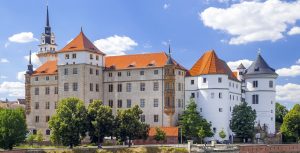 Meanwhile there were some good competition days, all over 300km distance and by the penultimate day I had flown some 2000km averaging just under 5 hours a day. The last day provided a dilemma in that I was in a solid second place and bar a disaster was guaranteed a podium, should I stick or twist? The answer lay with the Swiss team who were next to me on the grid and with whom we had formed a good friendship. They had suffered a technical problem on day 2 which put them
down the field and were therefore not a threat, but a good day could get them up to 3rd. We decided to start late, the gliding equivalent of putting hard tyres on in Formula 1. By flying together we could extend our ability to find thermals and reduce the risk of landing out. Once we had flown fast enough we should start catching the field up who would then be marking thermals for us. The tactic worked a treat and I won the last day and with it the competition, the Swiss narrowly missing out on a podium and finishing 4th. 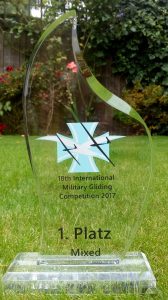